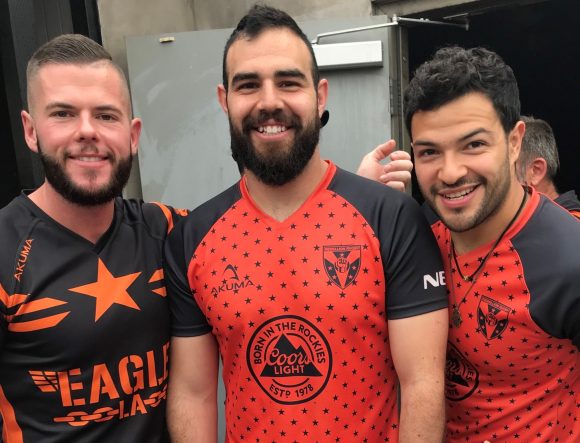 Founded in 2001, the Los Angeles Rebellion Rugby Football Club is a nonprofit amateur athletic club dedicated to promoting equality and inclusivity through the sport of rugby. We are the only inclusive rugby team in the Los Angeles area, welcoming all players regardless of age, race, fitness level, experience or sexual identity. We provide a safe and inclusive high-impact athletic experience, coupled with a healthy dose of beer, balls and brotherhood.

Training two nights per week from October – June (check our website calendar for details!)
Ten match SCRFU season against Division IV teams around Southern California
Annual friendly tournament against West Coast IGR teams each December
Biennial participation in the IGR Bingham Cup, a tournament featuring IGR teams from around the world. In 2014 and 2016 we travelled to Sydney and Nashville respectively, and in June 2018, we represent LA in Amsterdam!

The Eagle LA is a proud sponsor and co-host our monthly Ruggerbust fundraisers that help fund a majority of our season, along with several of our “Third Half” post-match celebrations and other special events.

More than just our primary supporter, the Eagle LA is our home away from home – so on any given day or night, you’ll probably see a few of us socializing there!

Interested in learning more or joining the team? Connect with us online – new players and supporters are welcomed throughout the season!